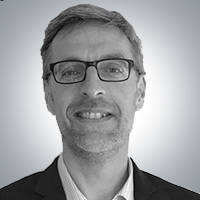 Frédéric leads our legal services teams across the Southern Europe Region and in Switzerland. Frédéric has over 20 years' experience as a transaction lawyer, specializing in IT, Media, Consumer and International Contract Law.

Prior to joining Marshall Denning, Frédéric was the Legal Account Support Lead for Hewlett Packard Enterprise in Switzerland, The Netherlands, Belgium, and Poland. In addition to his management role, he negotiated large BPO and ITO transactions.

Previously, he worked as a lawyer in several international law firms based in Brussels (Belgium). He was also a Scientific Faculty Member of the Economic Law Department at the Free University of Brussels (VUB), co-founder of the “Business & Contracts” Research Group attached to the university and visiting professor of e-Business Law at EPHEC. Frédéric is the co-author of the Belgian Code of Economic Law drafted on behalf of the Belgian Ministry of Economy and the author of various legal publications.

Frédéric established a Pro Bono First Line Legal Aid with the Social Services of the city of Geneva.